I had an email recently asking how to report on the number of updates per Target Group. Basically when a report is run using the WSUS Management Console, you can create a tabular report that displays something similar to this: 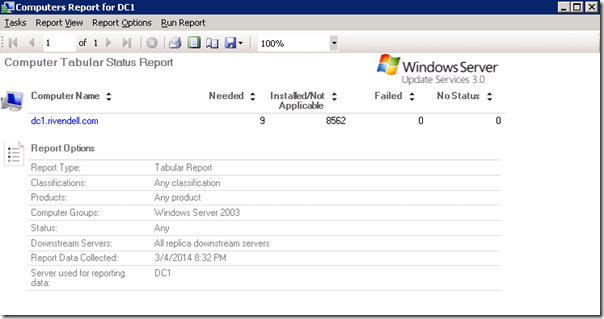 By specifying a Target Group and then report on all systems with the number of updates Needed, Installed/NotApplicable, Failed and NoStatus. Not too difficult to do with WSUS, but if you want to work with multiple target groups then you really are not sure what group belongs to what systems.

In the end, I wrote a fairly short script that the individual can use to get the information he needed. First I wanted to just show the number of updates per Target Group, then dive into a specific target group and pull number of updates per Computer (like the report above) and present it out. Lastly, I wanted to go even deeper into the rabbit hole and just pull updates which are Needed by a specific computer and list those out.

Before I do anything else, I need to make my initial connection using the WSUS API (WSUS Management Console is required for access).

First, lets take a look at the Target Groups:

One thing that I have done better all ready with the report is that I can see what how many updates require a reboot.

Now onto the Windows Server 2003 Target Group. Let’s see how many updates are needed per computer (in this case only 1 system).

Lastly, I want to dive even deeper into this and see what updates exactly are needed for my server before I go about approving them for installation.

Note my use of a UpdateScope object that is used to provide the necessary information for the InstallationStates (Downloaded, NotInstalled) so I can be sure to get an accurate report.

Now we saw that 1 update was pending a reboot, so the question is: what update was installed that is awaiting a system reboot? Let’s find out!

The only adjustment here was that I only had one InstallationState used (InstalledPendingReboot). I also created a ComputerTargetScope and applied the InstallationState of InstalledPendingReboot to better filter for only the computers that are in a pending reboot state. The rest was the same code I had used before. The nice thing about this is you don’t have to filter by target group or computername and just pull from all systems to see any computers which are awaiting a reboot and what update is requiring it.