Checking Out The Where and ForEach Operators in PowerShell V4

With the release of PowerShell V4, we received the Desired State Configuration (DSC) module as the main piece as well as some other things, some known and some not known that well. One of those things is the use of Where() and ForEach() operators (both added to support DSC) on an object, similar to the example below:

Ok, that really doesn’t show you the power that is in these two items (especially Where()).  So lets step into using Where() and try to do some filtering on some services.

Ok, nothing we haven’t seen before. Instead of piping the objects into Where-Object, we use a dot notation to call Where and supply a script block to it and we get the same results. So what is the big deal? Well, there is another parameter that you can set after the scriptblock to get some very interesting results.

The documentation for this is well, lacking. So in order to really what it is looking for, you can force an error to occur and it will show you the parameters that are expected on this.

Here we see the following syntax is expected:

Basically, you have to supply a System.Management.Automation.WhereOperatorSelectionMode enum and another optional parameter after that. What are the possible values that I can use? Lets find out!

Now we have defined all of these options, so now lets put them to some use and get a better idea as to what we are looking at. Note: All of these will use the $services=Get-Service object to keep everything consistent unless otherwise noted.

This is your standard filtering of data. It will only show you what was filtered without anything else special happening. 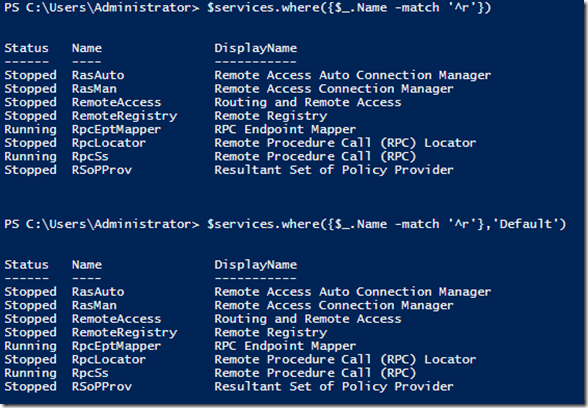 This verifies that we have essentially duplicated what Where-Object already does. So lets now move on the next item and see what we can do.

Now we start to get into the fun stuff! Just by calling First after the script block, it will return 1 item from the collection by default.

Now lets find the first 3 items in my filtered match.

Similar to using First, I will show you how to get the last item in the collection that is filtered using the Where() operator.

Here you see that the last item in the collection is displayed. Just like using First with an additional count of just how many to display, we can do the same with Last.

This is where it starts getting interesting. SkipUntil brings something different to the game when used with the Where() operator. I am also going to switch up and use a range of integers (1..20) to better show this one and Until. Basically, what happens is that when you use SkipUntil with your filter, it will display the results of the filter up until the number you specify. If you specify nothing for the 3rd parameter, then it will display everything including anything that would not have normally been matched via the filter. First lets look at this using a number to determine returned results.

Here you see that we returned the match of the filter, 2 as well as another value that is after the matched value in the collection.

If you just want that match, then do this.

Now with nothing specified for the 3rd parameter.

You can see that it not only displays 2, but the rest of the values afterwards. So what happens if no match is found based on the filter, will it display everything or nothing?

If you guessed nothing, then you are correct! This only works if there is a match found on the filter, otherwise nothing else will happen.

Until works in the opposite direction of SkipUntil. By that I mean that it will return values up until the matched object in the collection and will not include that match in the returned results.

As you can see, everything up until the 5 is displayed based on the match. If I want, I can choose to only display the first 2 values.

Ok, I have my $results variable filled with the collections. Now lets see the first item in that collection.

Here is everything that matched my filter. So if that is in this collection, then that must mean everything else is in the other collection…

Everything before the match and after the match was stored in the other collection. Pretty cool stuff!

We can also specify a number of those matches to be in the first collection and then discard everything else into the other collection with the excluded objects.

The first two items of that match in the collection and…

everything else is in the second collection.

There are performance gains from using the Where() operator over piping everything to Where-Object as well. This is due to you having everything loaded up into memory vs. running it through the pipeline. The following examples show various uses of Where against similar Where-Object examples:

You can see here that using the Where operator does have the edge in each of the examples.

The ForEach() operator is also new to PowerShell V4 and like Where(), does have performance perks vs. its pipeline counterpart yet slower than using ForEach () {}.

As with Where(), you can find out what it is expecting in parameters by doing the following;

Unlike the where operator, I have had little success in getting the expression along with the arguments to work properly. As I explore this some more, I will try to find some good examples as to how you can use these.

One thing that you can do is cast the object like this:

… with one that does the casting.

This entry was posted in powershell, V4 and tagged ForEach, operator, Powershell, V4, Where. Bookmark the permalink.