One of the things that I have been seeing are the different ways to compile a report or to create a collection of custom objects in Powershell.  In fact, there was a comment on a previous post saying that I should use the V2 style of custom objects instead of what I was using already. Whether it is creating a custom object using New-Object PSObject and then using the Add-Member cmdlet to add more information to the object, or using a hash table to display the data or some other method to accomplish this task such as Select-Object.

This made me think of not only which one provided the fastest results, but which one would give me the type of output that I desired?

James Brundage’s blog does a very nice jobs discussing the Pros and Cons of using Add-Member vs Select-Object.

MOW, Brandon Shell and Karl Prosser tested this before with some interesting results.  These guys are a lot smarter than me and showed some nice things including using C# code to create a custom object, which turned out to be crazy fast.  I wanted to expand on the testing a little more by adding more objects that were being collected to really see the differences in the time it takes to complete. Now I am still learning C# so I will not be using the C# code that they used in their test.

I am going to be looking at Add-Member, Select-Object and creating a Hash Table to see which one has the best performance and which one gives me the type of output that I am usually looking for, keeping the order of the properties as I have defined at the beginning.

Basically I wrote a script and hard-coded the number of objects and the amount of cycles that each method would be using and then finding out the number of seconds it takes for each method to run. The script I am using will be at the bottom of the post, so feel free to take it and run it on your own machine.  Keep in mind that my results will not match what you may get just because of what each machine might have for hardware and the current processes running on your machine vs. mine.

Here are the sample codes for each method:

It took a few minutes to run the script and give me the information I needed.

At first I had it writing verbose so I could see how long it was taking. Then I had the bright idea of creating a collection so it would be easier to see and compare each method based on the number of objects and the amount of cycles.

Breaking this down by number of objects, the first run with only 1 object shows that the Add-Member method was the slowest of the bunch followed by Select-Object and finishing with the Hash Table. Everything is within a decent time of each other, so you might think that any of these would be fine to use.

Using 2 objects begin to show the speed difference between Add-Member and the rest of the methods. Where the Add-Member method was only 8 seconds slow before has now jumped up to being 27 seconds slower just by adding an extra object. Select-Object actually was a little faster than before and the Hash Table was slower by milliseconds.

Using 10 objects in the last run pretty much sums up what has already been shown, that Add-Member is not the way to go if you are looking for performance when creating a custom object.  Nearly 200 seconds to work with 10 objects across 50000 cycles. Select-Object comes in seconds on this with a run of 20 seconds and the Hash Table custom object was the quickest at 18.2 seconds.

The winner by a nose in this test was using the Hash Table method to create a custom object. The caveat to this is that using a Hash Table means that you will not always get the property order that you put in. See picture below. 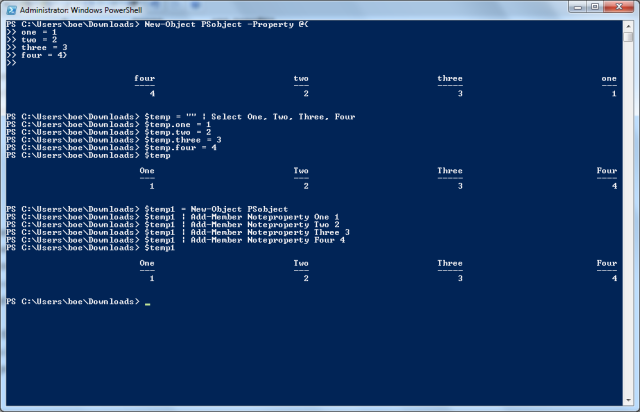 I know that there are other ways to accomplish this such as using system.collections.generic.dictionary or System.Collections.ArrayList. But my main focus did not concern these this time.

I wanted to do more with the code and remove the hard-coding of the objects with the switch statement, but I simply ran out of time.